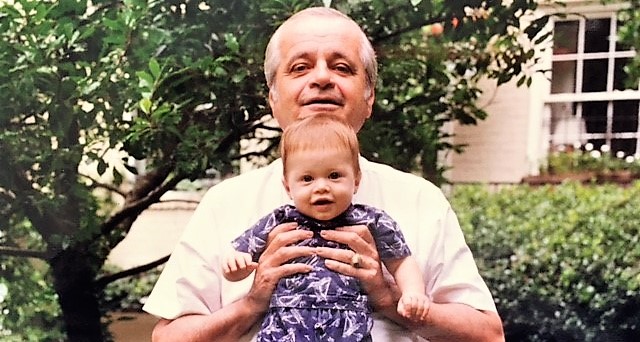 My Dad Sent Three Signs The Day He Died

Yesterday, the last breath of Hurricane Irma slapped branches and bent tree trunks. Now the air is still. It feels like the moment when you run out of things to say to God. I’m looking for signs. The news cycle is already spinning away from the weather and back to Washington, reminding me of the hours after my father’s death. They were indelible moments, but they keep slipping away.

I was sitting beside my father when he took his last breath and while we waited for someone to pick him up. After the tears and prayers, time stretched like a rubber band. I kissed him to feel if he was still himself, soft and warm. I didn’t want him to turn cold in his bed as if he was unloved.

Eventually, two men came to take him to the funeral parlor. It was the biggest shock of all. As they lifted him off the bed, his body collapsed inward like a string puppet being laid to rest. Without his heart and mind, he was a pile of useless pieces. I gave him one more kiss before they folded the flaps of the black rubber bag he left in.

When the sun set I left my dad’s apartment and walked to my cousin’s house. Waiting for the elevator in the hallway, I turned to the mirror on the wall and saw my dad’s eyes replaced mine for an instant. It was an extraordinary moment and at the same time it wasn’t. I had just watched him die. This was just another unbelievable thing that was actually happening. I didn’t question it. Instead, I got in the elevator, took the doorman’s condolences, and walked into the night.

The next sign came when I turned the corner at the end of the block, I saw a man who looked unstable. I had about fifty paces to decide what to do. A step before I reached him, I said, “Hello.” He smiled, gave me a knowing look, and nodded. I knew he was working for my dad. Two blocks later, I noticed an elderly woman struggling to get step out of a car. I reached in and offered a hand. She took it, kissed it, and said she loved me. Once again, I sensed my dad in her words.

I am not superstitious, and I don’t think heaven is real, but I am certain my dad’s spirit was with me the night he died.  His signs are precious gifts. He affirmed the value of kindness and made it clear he would always be with me. I also felt like he was telling me I was on the right path. Kindness is something I think about and try to practice. It was as if he was saying, “Keep it up.”

Unfortunately, I have trouble keeping kindness in the forefront of my daily thoughts. I want it to be a reflex. Instead, life’s to-do list, everyday anxieties, and my insecurities move to the head of the line where they don’t belong. I guess like everything else, you have to make a conscious effort every day to be kind. At least he told me I was on the right path.