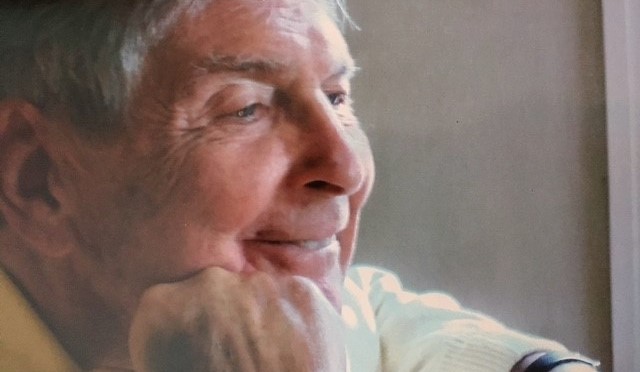 An Optimist Who Lived With Intention

My father-in-law Lou died one year ago. His daughter Barbara and I sat with him for the last bit life and the final blessing. A year later Lou’s gifts of unquestioning optimism and confidence seem more remarkable than ever. All his accomplishments began with a foundation of consistent hard work, but they were realized because he bone-deep believed in his ability to do great things. He was an optimist, and he lived each day with intention.

Lou’s native talent was athletics. He was invited to try out for the New York Yankees in high school and chose a college football scholarship instead. I believe he was most distinguished for his faith in himself. Lou was a wordsmith and he loved to tell stories, but writing was not a native gift. Still he dreamed of becoming a novelist. And when he retired he wrote books because he lived with intention. With the can-do spirit he carried everywhere and a daily effort in long hand, he wrote eight books and published three. He set up appearances everywhere he could year after year. When he turned 80, he became a columnist. At the age of 85, he wrote weekly columns for two newspapers. What an optimist!

Two days before he died he whispered to us, “Never give up on your dreams.” From his parched lips, a few of the last words he spoke. It was the single piece of advice he gave us. It came from his faith and from living with intention.

What do we do with his precious words to keep them alive? Lou would stir them in conversation again and again. Then he might write a column. He told the best versions of his stories at the dinner table, where he had our collective attention. Lou loved my home goods business Catherine’s Table, the storytelling, the artists. We would talk about it all. And he was never short on ideas. He had vision too.

Lou’s words, his wish that we live the life of our dreams, are with me always.