My son Matt was a wild boy. And in so many ways, he is my inspiration. I remember watching my two-year-old strip and jump in a park fountain. Matt lifted his head to the spray and stood in a state of pure joy as the water poured over his naked body. Next he was a three-year-old inquisitor, taking all the hardware off a door in our house. At four he was a chest-thumping hunter, romping through the woods in our backyard with a bow and arrow, rubber boots and a devilish smile. Before we met them, the neighbors actually referred to him as “the boy in the woods.” Then he was a five-year-old stunt man, launching from the roof of our shed in cowboy boots. There was adventure in his bedroom too. Sometimes I’d find him asleep on the floor with his head inches from the air conditioning vent and covered by a white sheet that expanded into an igloo with the air flow. 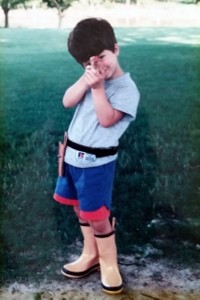 This is how a boy on the move dresses.

One of the only boys on a block full of girls with bows and pin-tuck dresses, Matt ruffled lots of feathers. He would charge out the front door in his Batman pajamas and cowboy boots with his Nerf gun loaded. Worried moms who watched him tear down the street would say things like, “He sure has a lot of energy!” “Can he hurt someone with that gun?”

Elementary school was hard on Matt.  In first grade, he was diagnosed with dyslexia and ADHD. It took him several years to learn how to read. Math was tricky too. Sitting still was the hardest of all. The light in the wild boy’s eyes faded for a few years. Eventually, he figured things out, but it was a rough road for everyone in many ways.

I’ve always been amazed at the way Matt recovers from setbacks and perseveres. He is a man whose learned to stand up to tremendous challenges, brush off the failures, and keep on climbing. Today, he’s a civil engineer and hydrologist. The wild boy who loved water so much that he jumped in a fountain is protecting it; the boy who took a door apart can build a bridge, and the boy who scoured the woods and scaled trees is an Eagle Scout. And he is always smiling. 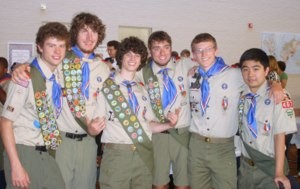